Many moons ago, I was stopped by a neighbour during my walk in my apartment complex. Her grandkids and my son sometimes played together, and in the time-honoured tradition of kids, sometimes didn’t. She stopped me to expressly commiserate with me about ‘what a lonely child your son is, playing alone in the garden’. Initially I thought it was a nudge to me to provide a sibling to my progeny. And I was a bit taken aback, as we were not on intimate terms for her to suggest that to me.

Then it dawned on me. It was a nudge at my son who was peering at insects in a corner of the garden, alone. And not for the first time. I replied instinctively to her and then pondered over her words, till much after.

There are many kids my son’s age in our complex. When we moved into this building four years ago, he had faced some amount of bullying. But gradually he had started finding ways around it, even if it meant playing alone on occasions. There were many evenings when he came home aglow with the happiness of having played with friends. The evenings he did play alone, he never complained. Being a ‘creature enthusiast’ he would spend time watching snails, marking the presence of several bats in a corner of the garden, gathering random sticks (weapons to guard the building, you see), and pieces of colourful stones (gems, mama!). He would draw maps of the complex, with areas marked for, ‘bat corner’ and hold your breath, graveyards! Imagination running wild!

My first, second and subsequent instinct was to rush to his aid, exhort his friends to allow him to play with them. I would invite friends from outside the complex to playdates with him. But it was not sustainable over a long period of time. While we worried about how he was coping, he seemed rather nonchalant. To our delicate (so we thought) questioning, he would shrug and say, everything is fine.

My husband and I realised that he was finding his own balance, within his ecosystem. He was sometimes alone, but he wasn’t lonely by any means. Slowly it dawned on us, that being alone sometimes was not really harming him. Far from it. Why do we believe that our kids have to be engaged every second of every hour of every day? There are enough studies out there which tell us that kids should sometimes get bored. Boredom is good for them. Being alone, with just one’s self for company, is good for kids. That is the time when they have to willy-nilly depend on their own imagination, devise their own entertainment. Get comfortable with who they are.

There is not a single child in the world who doesn’t have a friend. Every child is capable and will certainly form bonds of friendship, which will endure. But at the same time if they learn to be happy on their own, they will certainly grow up to be more balanced and happy adults. An ‘alone’ child will find various things to do with his time. Mine sticks bits and pieces and makes swords and shields. He loves discarded cardboard boxes and makes it into some weapon, however clumsy may be the effort, in the process finishing off all the duct tape in the house! He loves swimming and if there are no friends in the pool, he will launch floating rescue missions with the pool boards and floats. 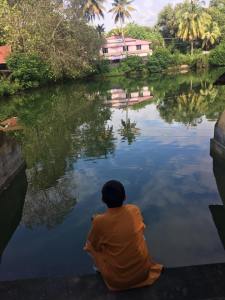 Yet, it is very rarely that he complains about being alone and bored. And he loves it when he has any kind of company. He balances both situations pretty well.

Many of us, as adults, fear to be alone. It plagues me too sometimes. I admire women, for instance, who do solo travels. That is the ultimate being alone experience. We fear being left to our own devices, to our own company. If a child is used to some alone-ness while growing up, in my opinion, it can only breed confidence, and not loneliness. Today, these questions seem moot to us. Our son is a happy child, and we value that over everything else.

So my answer to that grandmom then was, “Isn’t it good that he can spend time on his own so happily?” She snapped back, “Not at this young age!” Is there a good age, a cut-off perhaps after which it’s acceptable to be alone? Shouldn’t being alone be as much a part of a child’s growing up, as being surrounded by family and friends? I believe so, yes.