“See, that’s what I am talking about!”, exclaimed our Istanbul guide Zehra (name changed to protect identity) in dismay, pointing to a group of young girls at the Topkapi Palace, a few of them with their heads covered with scarves. “Covering the head is forbidden as per Turkish law. But now, we are seeing more girls with their heads covered”. Zehra, a strong feminist, nationalist, and liberal, was our guide for the day in Istanbul. She was unabashedly critical about the path her country was treading, yet helpless in the face of the ultra-conservatism she saw slowly taking root in Turkey.

For both Sachin and I, this was our first experience of Istanbul. We had transited through the city before, but never explored it. Istanbul to me, seemed the very antithesis of Perast in Montenegro, where we had just spent a blissful five days. Perast was ethereally beautiful, peaceful, and by the second day we were on nodding terms with the locals, with our frequent forays out. It had been almost heart-wrenching to leave Perast. And the contrast, coming into Istanbul, couldn’t have been more vivid.

From the word Go, Istanbul to me, was a riot of colours, a smorgasbord of sensory experiences, and most of all, a perfect example of what happens to culture, facial features, and way of life, when Asia and Europe meet and blend, so riotously. We stayed at Hotel Ajwa located bang in the centre of the congested, tourist centre of Sultanahmet, on the European side of the gently flowing Bosphorus. On an earlier transit we had stayed on the Asian side, and I had been lulled into thinking that here was a calm, benign city. It’s absolutely not. Sultanahmet, to me, was in many ways, a reminder that for all its European efficiency and chic, Istanbul is essentially Asian at heart.

Chaos seems writ large in the city’s very fabric. From the wildly weaving traffic, to the eagerly gesticulating salesmen in the Grand Bazaar trying to attract your attention, it’s chaos. It was outside Grand Bazaar, while tightly sandwiched between two women in a mass of people, that I had an out of body experience. This, I thought, is how it feels when you have nowhere to turn, and nowhere to go. Literally. For many minutes we were stuck like that, and then we came unstuck. And I fled into the Grand Bazaar.

The Grand Bazaar is a covered, busy market, the interior of which brought to mind the beautiful baroque Cloth Hall of Krakow’s Town Square, which has stalls selling jewellery, ceramics, and dainty laces.

The comparison ends there, of course. The Grand Bazaar is grand in every sense of the word. The colourful lamps on display blaze with a  zillion twinkling lights, while the vast array of gorgeous ceramics, bags, psychedelic stoles and shawls, chess sets, copper and brass utensils, and gold jewellery, vie avariciously for your attention.

It’s so easy to fall prey to the enticing charms of these wares, but for the bargaining. It is assumed, especially if you are an Indian, that you will bargain, so it’s a real pain to have to bargain. Much to my chagrin, one of the shop owners said, Madam, you bargain well! I hate bargaining from the bottom of my heart, and my attempt had been pretty perfunctory. So I knew he was just going on the charm offensive. Ignoring him was easier said than done, and I bought what I had to buy and got out.

But it was in the Spice Bazaar that we spent the real moolah. From lemon salt, dried fruits and pomegranate syrup, to sun-dried tomatoes and beautifully packaged Turkish delights (sweets) of pomegranate and almond flavours, the Spice Bazaar is a real cornucopia of foods and spices, and emits the most interesting smells.

The Grand Bazaar and the Spice Bazaar can be a bit of a tourist trap though. Everything is way too pat, every response too rehearsed. The lanes and by-lanes outside of the two bazaars have some interesting stories to tell. Here, there are stalls selling a variety of things like the famous Turkish calligraphy, little figurines of the whirling dervishes, handmade soaps, etc. Even the gleaming fresh fish on display may just be of academic interest to tourists like us, but are still so attractive. As one traverses the lanes of Istanbul, every experience takes on more meaning, every sight is visually more appealing, every bazaar seems something out of the Arabian Nights! 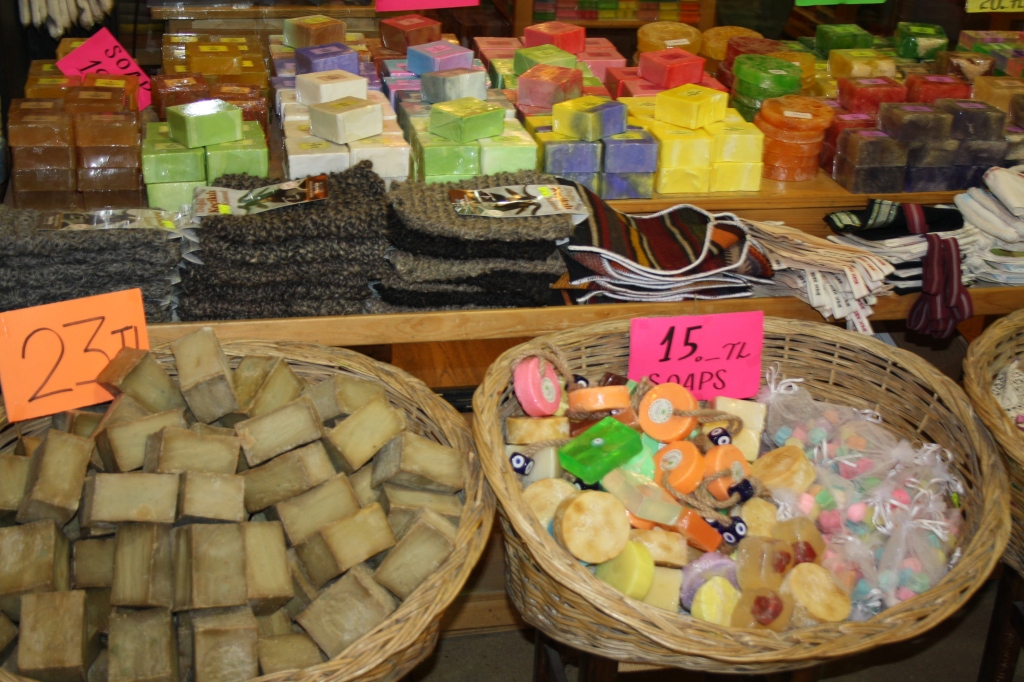 The proper introduction to the city came the next day though, with Zehra. Hailing from the northern part of Turkey, she has a healthy disdain, tempered with loads of affection, for Istanbul. With pride she pointed out the sights of her adopted city, narrating the history of her country which has seen, since the beginning of the Christian Era, the Byzantines, the Ottomans and then, the liberal Mustafa Kemal Pasha ruling over Turkey. Kemal Pasha was an especially liberal leader, who vowed to put Turkey on a secular, progressive track, which meant women’s liberation too. Something Zehra is immensely proud of.

But, things are changing subtly. The current political dispensation in Turkey has made education in Islamic schools free, which means a large number of children are being sent to these schools, depriving them of what could be seen as a more liberal, progressive education. Head scarves are back, and the general feeling is that the country is treading a conservative path.

Yet, Turkey is a country with a very large heart. It currently hosts the most number of Syrian refugees, nearly four  million officially registered. Such an influx of refugees has meant a degree of pressure on the social services, and in a bizarre twist, territorial squabbling between the ‘local’ beggars and ‘refugee’ alm seekers! There is a price to be paid for being welcoming hosts.

Not just refugees and tourists, Istanbul attracts all other sorts of visitors. We were stumped by a very strange sight we encountered often on the tour around Sultanahmet – men with bandages (sometimes bloodied) wrapped around their heads, sightseeing. What a sight! Istanbul is apparently, a major hub for people wanting to get cosmetic treatments like hair transplant, botox, etc. Obviously, the men with bandages were fresh from a hair transplant session. I could only marvel at their determination to sightsee!

We spent a considerable amount of time with Zehra that day. It is a testimony to her skill, that we didn’t realise the passage of time. With consummate ease she navigated Sultanahmet, telling us stories about each monument, even pointing out the resident cats of Sultanahmet! Among all the monuments in Istanbul that Zehra took us on the walking tour – from the Topkapi Palace, the Blue Mosque, the underground cisterns, the Grand Bazaar and the Suleiman Mosque, I was most impressed and awed by the Hagia Sophia or Ayasofya Museum.

It so well encapsulates what Istanbul stands for. Built in the 6th century AD, it is considered an epitome of Byzantine architecture. The remarkable thing about this awe-inspiring monument is that for more a thousand years it was a Greek Orthodox Church, which later became an Ottoman Imperial Mosque under the Ottomans, and is today the Ayasofya Museum. Though many of the original features like the altar, bells and mosaics depicting Christianity were glossed over, some still remain.

Ayasofya is built on massive lines, and when you enter through the Emperor’s Gate, you truly feel royal. The gates are so massive that they look fit for caparisoned elephants to enter, like some of the darwazas of Indian forts.

The massive dome and the extremely high ceiling, as also the colourful mosaics, make for an extremely regal monument. The Ayasofya is also a highly controversial edifice, with ongoing debates about the uncovering of the Christian mosaics, and whether the monument should revert to being a mosque again. A sign of how the wind blows in Turkey today?

Zehra undertook to introduce us to not just her city’s history, but also to its food. Eschewing the more fancy places, she took us to a small, but a very colourful restaurant, Omar, in the heart of Sultanahmet, where we tasted the testi kebap, a meat dish cooked in a clay pot.

The last part of the cooking process is done right next to your table, when the clay pot is roasted in the flame, the lid opened, and the kebap decanted with a flourish. I must confess, while I found this dish quite tasty, I vastly prefer and absolutely love the traditional kebaps on skewers, and the ubiquitous doner kebaps that we had at the ‘Hamdi’ restaurant overlooking the Grand Bazaar. The doner is of course wildly popular beyond the country’s borders. It’s in fact, our go-to comfort food too, when we travel in Europe.

Ironically, one of our best meals in Istanbul was an Azerbaijani meal. Turkey has strong ties with Azerbaijan, and ‘Zeferan’, the Azerbaijani restaurant at Ajwa is quite  famous. The food was truly mind-blowing, especially the shah pilaf, a less spicy, more delicate version of our biriyani. When they brought it to the table, I thought it was a mistake, as the dish resembled if not a cake, but definitely some sort of a dessert with the garnish of apricots on top.

We cut into it to discover the most flavourful, delicately spiced rice, and melt-in-the-mouth meat. Food like this makes one grateful that one is able to travel and experience, even if briefly, other cultures.

I have only one grouse with the Turks, and that is that they take their warm beverages seriously, and I wish they wouldn’t. They slurp many glasses of tea and coffee every day. I love the Turkish tea, there is a charm to drinking black tea which is so light, and aromatic. But Turkish coffee is something I will never get my head, or my taste buds around. I found it thick, almost sludgy, and it tastes, quite frankly, horrible. I am a finicky coffee drinker, I agree, given my South Indian roots, but I can usually tolerate most types of coffee. Turkish coffee, I am sorry to say, I will never have willingly.

While their coffee is of questionable taste, the Turks are a friendly, polite, and a fair race, and I don’t mean their skin colour. They are aware of their place in the world because of their history, which has over the years and especially in the 20th century, been very progressive. The melting pot of cultures that Turkey is, has resulted in a race with bold, handsome, refined features, making them a very good looking race too. And they are confident about their place in the world. They wear their culture and history, very well indeed. I hope and pray, it remains that way. 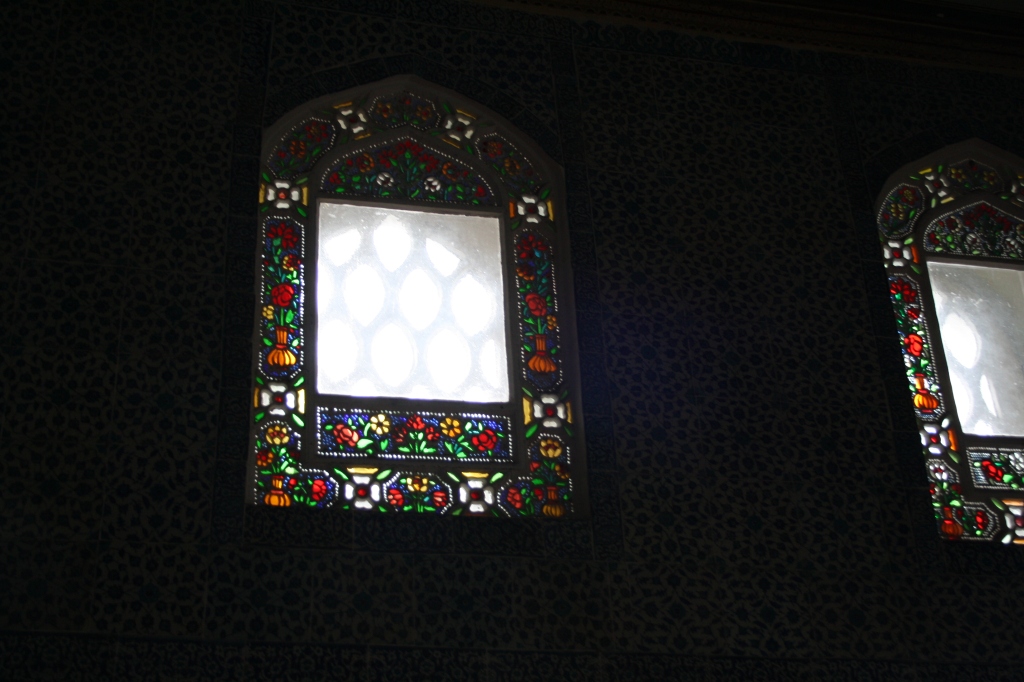 2 thoughts on “In intriguing Istanbul”