We were in Montenegro, when we decided to visit neighbouring Croatia. Dubrovnik in Croatia has achieved cult status in recent years because of the hit series Game of Thrones (GoT), many parts of which were shot in that city. We are ardent fans of GoT, and Dubrovnik was just an hour and a half by car from Perast in Montenegro, where we were so blissfully ensconced.

Only the desire to see the locations of GoT could have torn us away from Perast, to which we had lost our hearts. In Perast, each one of us had discovered that we could indeed be far from the madding crowd, and be happy. The ethereally beautiful Kotor Bay which was just outside our apartment window, had cast a spell on us so powerful that I had the mad urge to overstay our visa! If souls can talk to a place, mine did, to the tranquility, beauty, and the sheer peace of Perast. I remember a particular morning, when we had ventured out early, and were almost the only ones out in the cold, damp, clear morning. I remember looking out at the tranquil bay, taking a deep breath, and shutting my eyes, capturing the feeling at that particular moment. After returning, I have often wondered, why. Is human nature naturally attuned to the beauty and simplicity of peace and silence? Do we rediscover an innate, but an absconding part of our very being when we inadvertently discover places like this?

But as far as Dubrovnik was concerned, all of our plans came to a naught when we realised that we didn’t have the Schengen visa to enter Croatia. Our US visa had been enough to gain us entry into Turkey and Montenegro, our two ports of call on this trip. Sadly, we gave up the idea of visiting Croatia. But the urge to drive out was now upon us, and I think we looked forward to leaving Perast for the day, just so that we could ‘return home to Perast’!

That is how we found ourselves strapped into the car, setting the Google Map to Trebinje, Bosnia-Herzegovina. We heard there was a lovely monastery to see. The idea of seeing the monastery and eating lunch in another country, before returning to Perast, was so very attractive. So we set out. Once we left the Bay of Kotor behind, the road to Bosnia wound around vast fields and distant hills. At the border into Bosnia, we faced both immigration and customs, while seated in the car. How cool is that!

We were welcomed into the Republic of Srpska, which is one of the two entities of Bosnia-Herzegovina. And soon we were in Trebinje.

Trebinje is a small city, with much history. The Tvrdos Monastery actually dates back to the 4th century AD, though over centuries it has been destroyed and reconstructed, the last one being about a century ago. It’s a peaceful monastery, surrounded by green vineyards, with a river flowing past it.

The monastery chapel, as with most such chapels, is small and serene. There were tourists who were conducting some rituals, and we prayed briefly too. The monastery is known for its wine production, and is quite a tourist attraction, though we didn’t pause to taste any. We then left for the city of Trebinje, a mere 5 km away.

Trebinje was for me a surreal experience. I have rarely been in any place in Europe, especially in recent years, where I have seen people stare at us as much as they did in Trebinje. Indians have reached most corners of the earth, and one would think Bosnia is definitely one of those corners. It wasn’t a rude stare, just a shocked one, jaws agape, at seeing a sight one isn’t accustomed to. It was a bit unnerving, but we tried to be nonchalant, three Indians, walking down a street in Bosnia, trying to look as if we belonged! In retrospect, what a hilarious sight we must have presented!

In the centre of the town, a farmer’s market was just winding up, while we went inside a cafeteria looking for some lunch. Lunch was rather coarse, though tasty fare. A kind of ham sandwich, for which we paid with Euros since we very clearly didn’t have the local currency of Convertible Mark. They happily took the Euros and gave back change in Marks which we discovered later. So we now have a bunch of Bosnian Marks to add to our currency collection. People at the cafeteria thankfully didn’t stare, which went a long way in redeeming the city for me.

For dessert Sachin insisted on going to a rather busy and stylish cafe we had seen. We went with hope and got some lovely dessert, but also enough smoke to coat our lungs for a while. People here have the rather awful habit of smoking indoors. Sachin said it’s a sure sign of a still evolving society.

Trebinje overall, doesn’t give one the impression of being a vital place, which I hope isn’t symbolic of the rest of Bosnia-Herzegovina. There is almost a miasma of tiredness, and of being poorer cousins to their more alive, more prosperous neighbours. The town of Trebinje has loads of history. Yet, there is a sheen of dullness about the place. Despite the autumnal trees and the cool weather. 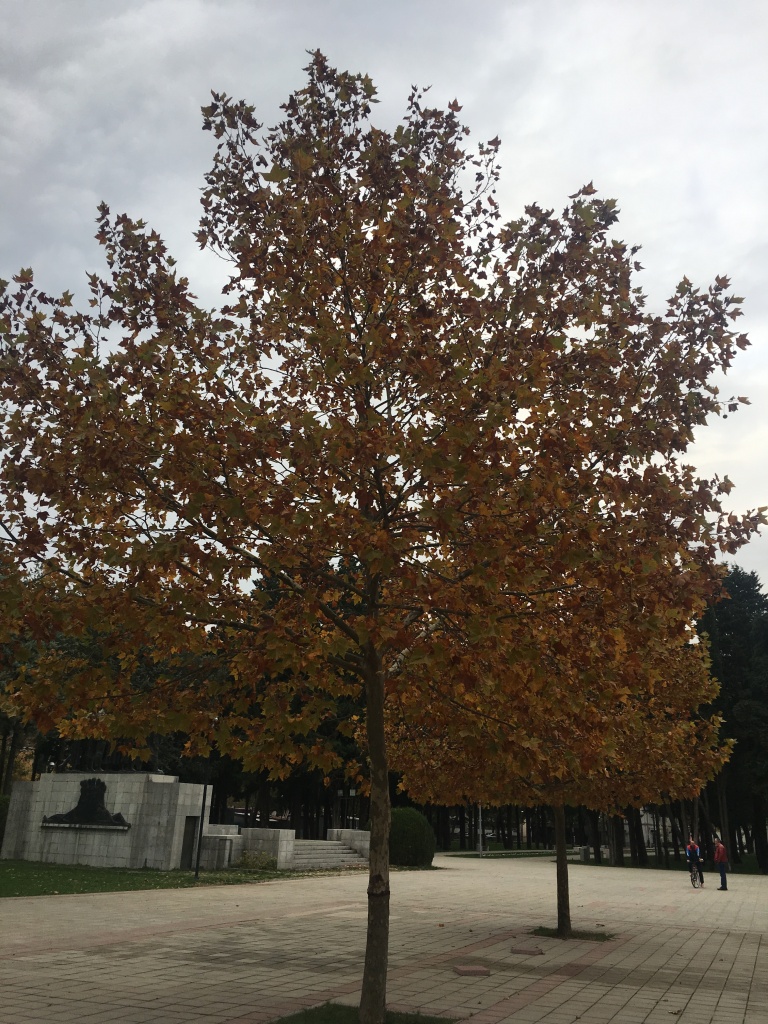 We started back from Trebinje soon after and reached Perast by 5 pm, when the tourists had vacated the town, and what a relief that was! It was dark and quiet, and we were  just in time to see a humongous cruise ship glide silently across the bay in front of our apartment, its windows ablaze with lights. What a mesmerising sight indeed, to come home to…:-)